For the Love of Little Debbie 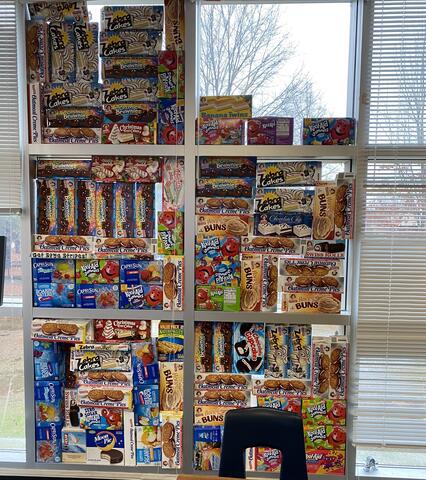 If one were to enter room 109 in the Robinson Center building at Heathwood Hall Episcopal School on a Thursday morning from 10:10 to 10:35, one would encounter an environment like no other.  As most Heathwood high schoolers know, Thursdays are for advisory, during which students meet with their advisor and fellow advisees to talk about the upcoming weeks and tasks. This centering time ensures everybody is staying on top of assignments, feeling good about their responsibilities, and generally having fun.  In Mr. Blackstone’s advisory, we take that last part very seriously.

Upon entering Mr. Blackstone’s room, one’s attention would immediately be drawn to one of the biggest attractions and accomplishments of the “Stone” advisory.  At the back of the room, opposite the door, there is what we call in Mr. Blackstone’s advisory: The Wall. The Wall is a new project that the advisory unanimously agreed to start in 2020.  At first sight, The Wall looks to be just a collection of old snack boxes stacked on top of the windows in the back wall of Mr. Blackstone’s room, but upon closer investigation, one would see that it is much more than that.

Eventually one Thursday (who knows how), we advisees decided to put all of these leftover Little Debbie boxes to good use, and thus, The Wall was born.

The Wall consists of thirty different types of snacks, with the majority being of the Little Debbie variety.  Currently, there is a grand total of one hundred and thirteen snack boxes included in the wall, with that number growing every Thursday.  However, the one number that our advisory is “most” proud of is the number of total calories that have been consumed to make The Wall.  And that number is… one hundred seventy-two thousand six hundred twenty-five calories.  172,625.  Of that, 34,680 of those calories are from Mr. Blackstone’s favorite, the Oatmeal Creme Pie.

If one were to stop by the Blackstone advisory, and by chance have a couple of snack boxes to share, we would love to add to The Wall and fill up another window pane. Heathwood is where the fun happens.

*Fun fact–we sent a message to Little Debbie’s instagram page with a picture of our wall, and it received recognition.  We are currently hoping for a sponsorship by the end of the academic year.