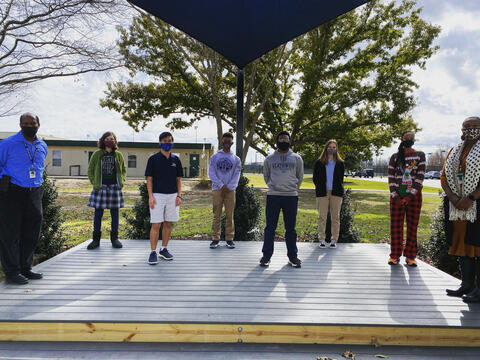 When I agreed to attend the Student Diversity Leadership Conference (SDLC),  I had no idea what to expect. The word “diversity” means so much, so I was not fully prepared to enter in a space that included so many different types of people. I’ve been at Heathwood since nursery school and in Columbia for longer than that, growing up in what I call a “bubble,” or a very isolated space. SDLC was a surreal experience that had everything outside of my bubble. For the first time, I met people who looked like me, sounded like me, and have had the same struggles that I have had. Not only were there kids of all perspectives, attendees physically Zoomed in from every corner of the US, some even outside of the States. After spending a week with such amazing people, the word “diversity” now means so much more to me.

My faculty facilitators, Priya and Ilan, led my group (named after Sydney Barber) through several exercises throughout the week, but most of the time was just spent talking. In several different breakout rooms, not only did I get to share my thoughts and experiences, I got to hear even more. It was the strangest feeling not being the odd one out. Living here, I’ve gotten accustomed to always looking different and feeling different; however, all of a sudden I was the same as everyone else when I stepped into SDLC. In that space, I learned simply through open conversation, not powerpoints and lectures. If I could only bring a single thing from SDLC here to Heathwood, I would carry over that way of teaching through having kids engage very candid and personal conversations. I will say, however, that the environment SDLC created which allowed these types of conversations was probably unique to SDLC. The conference built that space by using these different mantras called “norms.”  The norms I found most powerful were: “Listen, listen, listen, and process,” as well as “Speaking from the ‘I’ perspective.”

Concerning the first norm, this was the general mood of the conference. In order to fully understand other people and not jump to conclusions, I had to listen, listen, listen, then process. Sometimes we jump to conclusions too soon, so practicing this mantra was integral to not devaluing someone's experiences. “Speaking from the ‘I’ perspective” is also what I am taking away from SDLC. The staff stressed how important it is to only speak from what you know and experience. Speaking for other people and generalizing eliminates a whole narrative. Dr. Rodney Glasgow put it best when he told us, “When you speak from that ‘I’ perspective, you can never be wrong.”

Even though the conference has ended, I am still in touch with a few friends I made. The multiracial affinity group for queer kids created an Instagram groupchat that I am a part of, the Sydney Barber group also made a group chat, and I actually made a friend who lives in New York. Looking back on it, SDLC was really just a platform to amplify our voices. While it did teach and lead us through activities, they never pushed ideas onto us. They even encouraged us to challenge other people's opinions. This may be a cliche, but it certainly is not the conference itself that I will remember; it is the people. Through speaking to so many kids, I have realized how lucky I am to be at a school that is moving in the right direction, and I have also realized how much further Heathwood can go in the direction of diversity and inclusion. After attending SDLC, I know that the change starts with me and kids like me, and I am excited to bring what I learned back home.