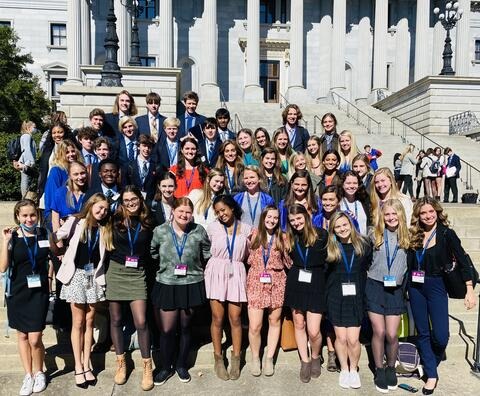 The 45 Heathwood students who participated in the 2021 South Carolina Youth in Government Conference November 15-17 not only gained hands-on experience in the legislative and legal processes but also returned to campus with an impressive set of accolades.

The Heathwood delegation had five pieces of legislation signed into law by the student government - not a small feat when each bill has to survive committee review and votes by both legislative chambers. Lauren Free and Ellie Draffin's legislation also received the Outstanding Bill Award, presented to the bill authors based on the feasibility of the proposed policy, focus on an issue that needs to be addressed in our state, and overall composition.

On the legal side, Cameron Truesdale and Annie Benoit were recognized as the Outstanding Appeals Team.

Seven Heathwood students served in leadership positions at this year's conference, to which they were appointed based on their performance in previous YIG conferences:

The bills by Heathwood students that were signed into law include:

3. Abby Mullins, Virginia Bowers, Celia Deese - AN ACT TO BAN THE USE OF SOLITARY CONFINEMENT FOR YOUTH IN PRISON

4. Madeline Hurst and Madelyn Gomez - An Act to Reduce the Tax of Menstrual Products

5. Conor Greer and Spencer Thomas - An Act to Increase Restrictions Regarding the Purchase and Ownership of Firearms

South Carolina YMCA Youth in Government is a year-round series of conferences, trainings, volunteer opportunities and other events. All program components help high school students learn to take their passion and enthusiasm for strengthening our state and nation by joining with other students through civic engagement and active democracy. While at the annual statewide YIG conference, students participate in a simulation of South Carolina's democratic process. Acting as Senators and Representatives, students write, debate and vote on legislation. As candidates and lobbyists, students experience the rich spectrum of activity that constitutes our political process. As media delegates, students create and publish a nightly newspaper. As attorneys and justices, students compete on mock trial teams, or on moot court teams (appellate). Officers elected by students serve as Governor, Lt. Governor, Speaker of the House, Attorney General, Secretary of State, Secretary of Education and Comptroller General.